Are valuable parts of Bonaire’s nature being destroyed by money hungry Dutch entrepreneurs, who bulldozer ancient cacti and trees in order to build villas for the rich and wealthy, or are we dealing with privately financed program to restore nature?

It’s up to Minister of Housing and Spatial Development Hugo de Jonge and Secretary of State for Kingdom Relations and Digitization Alexandra van Huffelen to provide the answer. Member of parliament Lammer van Raan, of the Partij voor de Dieren (Animal Party), asked a series of Kamervragen (parliamentary questions) about the plan of Bonaire Properties NV, to develop a small part of former Plantation Bolivia for the purpose of housing, agriculture, and eco-tourism.

De Jonge and Van Huffelen spoke to both Wilma Nijland (of Save Plantation Bolivia) and Mieke Breemhaar (director of Bonaire Properties) during their visit to Bonaire. They also had a look around Bolivia, where naturalist Johan van Blerk explained the current state of nature on Bonaire. “From my knowledge of endemic tree- and plant species, I explained what’s the actual situation on Bonaire concerning nature.”

Van Blerk is worried about the central part of Bonaire, from Seru Largu to Rincon, referred to as the Midden Terras (Middel terrace). “People often don’t realize that the island’s original nature can’t be found on the former plantations. These were cultivated and after they were abandonded, no one looked after them anymore. The people who grew up in the last four decades, might think that the mondi is nature, because a frame of reference is lacking. De original vegetation can still be found on the upper middle terrace. Almost all endemic trees and plants, that have by now become rare, are found there. I sometimes call it the Hoge Veluwe (Dutch nature park) of Bonaire.”

Twenty years ago, the tree expert moved to Bonaire. “In the Netherlands I always had an occupation at plant nurseries and in plant trade. We traveled all around the world, but when the kids came we went to find a tropic residence. We found Aruba too american and Curaçao too crowded, so we chose Boniare, that was very peaceful and quiet back then with only 10,000 inhabitants.” Van Blerk’s wife found a job at the local government, he himself found a job at a gardener. “Among other things, I set up a garden center/nursery. I spent a lot of my free time in nature. Nature is my passion.”

He got involved in reforestation projects of STINAPA and Stichting (foundation) Echo. “In 2018 I got the chance to take over the Tera Barra foundation. I started to focus on the development of a natural garden and the nursery of endemic species. By then, I had seen that for landscaping and gardening, a lot of trees and plants were being imported. I wonderd why. There are so many suitable endemic species, like the evergreen Wakaya, which is very fit as a shadow tree, but also as a hedge. There’s even a pretty local type of Ficus.”

Van Blerk mainly grows for nature projects, but also individuals can buy endemic trees and plants from him. “On thursday, friday and saturday, the greenhouses are open for public. I have enough plants in stock. For Stichting La Montañita we grew 100 plants for a reforestation project on San José. For the tree holiday at STINAPA, we grew trees that were planted and, furthermore, we delivered 300 plants to children to place in their gardens, in order to promote sustainable gardening. We also delivered 650 buttonwoodtrees to Mangrove Maniacs for reforestation around the mangroves at Lac. Bonaire needs to become a green island again, like it once was.”

That’s why Van Blerk thinks the Midden Terras deserves a lot more attention. “In the Spatial Development Plan Bonaire (ROB) it’s described as nature, but it isn’t being protected in any particular way. Every time, a little piece of land is taken of for the benefit of housing developments. Because it happens one plot at a time, it isn’t that noticeable. There are also a lot of free roaming goats. Don’t get me wrong, I have nothing against goats: they are part of the culture here, but they eat all seedlings in nature. In Washington-Slagbaai it has became visible how quick nature can recover after removing the goats. I pointed out the urgency of protecting this area to Minister De Jonge.”

What’s definitely doing great, is the garden of the Tera Barra foundation. “Ever since we fenced the garden, everything is blossoming and flourishing abundantly, including herbs that attract all sorts of butterflies. We are making trails with information signs. Also, a visitor centre will be set up. We received showcases for this from the Prince Bernhard Culture Fund. I think the visitor centre will be opened in septembre or octobre. At a small piece of land of five hectares we show how rich and diverse Bonairean nature is.”

The quick recovery of nature was possible because of the proximity to the Midden Terras, that serves as a seedbank for biodiversity. Tera Barra is showing the positive effects of excluding grazing animals, and, how with a little active reforestation even a strongly degraded area can recover quite fast. This principle could be easily applied at the former plantation Bolivia, Van Blerk thinks.

Plantation Bolivia is on the brink of becoming a big, arid plain.

“The biggest problem are the free roaming goats. They eat everything, so seedlings aren’t able to mature. The biodiversity has largely been lost. This concerns Bolivia as well. By excessive grazing a lot of nature has been lost. The middle part is a great arid plain, with some trees here and there. If these die of old age, no new ones will grow. The entire area has stopped renewing decades ago. If nothing happens, the last pieces of nature will be gone here as well.”

Van Blerk closely follows the discussion between proponents and opponents of the development of Bolivia. “I don’t want to get mixed up, I’m not on anyone’s side, but the story that Bolivia entirely exists of valuable nature, is not true. Only a small amount of degraded dry tropical forest is left, in the northeastern part and along the cliffs. There are mostly large open areas where nothing will grow anymore. A report from 1956 already contained warnings that this loss of nature would occur if nothing happened. Since then, nothing was done.”

“The first time I heard about the plans to built houses on Bolivia, I had my reservations. For me, the island doesn’t have to grow, I think it’s overcrowded already, but I also realize it’s not possible to prevent development. At first, I was afraid housing would be realized at locations with still some dry tropical forest and a view on the sea, near Arawak, along the caves with bats and where also a lot of Lora’s are still seen. After all, these are the most beautiful places to live.”

Therefore, Van Blerk was skeptical at first. “But they had a lot of research done into what are vulnerable locataies, in order to stay away from those and take protective measures. They also listened to nature organizations. Most of the counter arguments have been tackled. There will only be built in the middle part, where not much damage can be done to nature, because there hardly is any left there.”

In the meantime, Van Blerk also has learned that there are advantages with the development, and he is happy the developer seems to have recovery of nature in mind. According to plans that have recently been presented on Bonaire, the parts with the highest natural value will be actively protected and reforested. 85 per cent remains ‘Open landscape’ with active recovery of nature, 15 per cent will be developed.

On 60 per cent of each plot, endemic species have to be planted. “This means that there will appear a lot of natural vegetation around the houses. It is intended that all goats will be removed from the area. This would be very good for nautre, because seedlings will be given the opportunity to grow. In this way, nature restoration can become reality in a relatively short amount of time. It can be privately financed by revenue of the housing. The local government could and would never do this on private property.”

Van Blerk hopes that the visit of Minister De Jonge represents a turning point. The minister wants to lay down a spatial development plan for the island, that has to balance housing, entrepreneurship and nature. 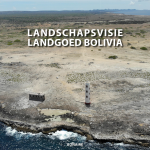 Bolivia Estate is being developed by
Bonaire Properties N.V., with as a starting point an optimal balance between preservation and recovery of nature and cultural heritage, housing, agriculture and recreation.