Do you have a question for us? We are happy to answer it! Did you not find your question below? Contact us through our contact form.

What does it mean when an area is intended for “Open Landscape” in the ROB 2010?

However, the Executive Council of the OLB holds power of amendment to allow certain developments in areas that are intended for “Open Landscape”. This power is written down in the ROB 2010. When a development turns out to be desired, the Executive Council may change the designation. In the case of Bolivia, this means that agricultural activities, day recreation, tourism accommodations in the form of eco-lodges, a golf course, and ‘rural living’ are allowed. Therefore, it is permitted to initiate development on areas that are intended for “Open Landscape”.

Why is there a picture of waste on Curaçao in the vision document of Bonaire Properties?

In an earlier version of the landscape vision for Bolivia Estate, a picture of waste on Curaçao was indeed accidentally included in the document. The picture has since then been replaced by a picture of dumped waste on Bolivia, near the former land house (page 22, in the lower left corner).

Does the development of Bolivia contribute to improved living conditions for sea life around Bonaire?

In the document “A nature inclusive vision for Bonaire in 2050” researchers of Wageningen University and Research write that restoring the landscape will limit the negative impact of erosion and sediment runoff on the marine ecosystem. By decreasing the amount of free roaming livestock and restoring vegetation, erosion and sediment runoff will be limited (page 16 en 17). This especially impacts the more sensitive areas in a positive way, of which Bolivia is one (see image below). Erosion and sediment runoff decrease living conditions for sea life, because coral reefs are “smothered” and life on the bottom of the sea will not receive any sun light.

The core of the development of Bonaire is the recovery of nature. In order to cover the costs of realizing this recovery, housing development is necessary. The nature recovery includes reforestation and the improvement of the seasonal gullies, which improves water infiltration. This prevents the runoff of nutrient sediment, which positively affects seagrass fields in front of the Bolivia coast, where sea turtles forage. 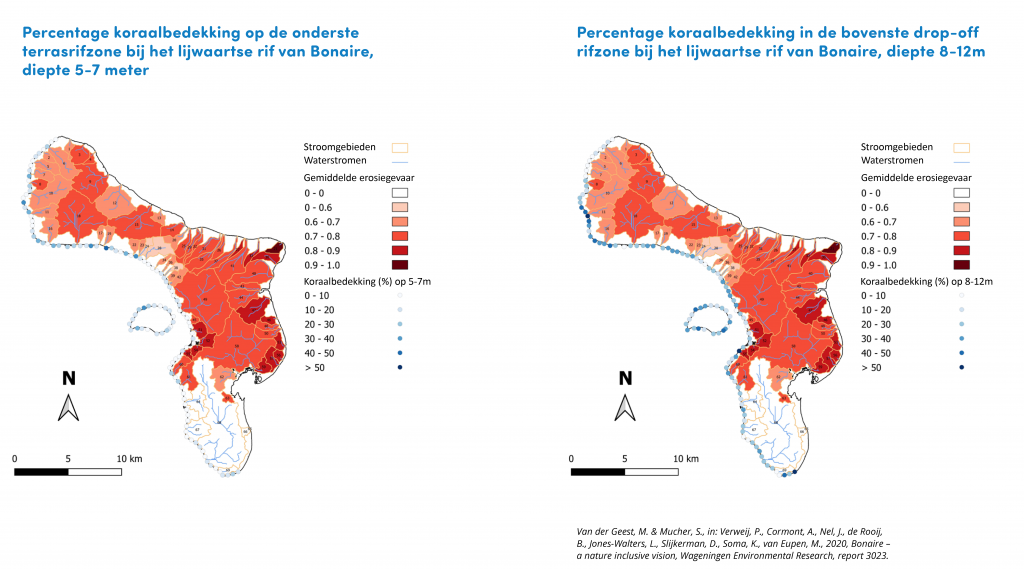 How certain is the development of Bolivia?

It’s not certain yet. Before the development can take place, the Bonaire Spatial Development Plan (ROB) must be altered. The procedure to do this has to be complied with.

Are all the required permits already issued?

Has environmental impact research been carried out?

No, not yet. A starting document has been drafted in order to execute the environmental impact assessment, which is required in order to alter the Spatial Development Plan.

What other researches have been carried out?

Both CARMABI and Wild Conscience were commissioned by the owner to carry out research. The outcome of these researches have been the starting point to create a landscape vision and urban development plan. In the past, Bolivia Estate was subject to research on several occasions. Links to relevant research can be found on this website.

How will damage to nature be prevented?

Building- and other activities will only occur on sites with a very low natural value. By protecting and enhancing sites with high natural value, and the capture/removal of grazing animals, nature in general will benefit on Bolivia Estate.

Will trees and cacti be cut down?

It is impossible to ensure that absolutely no trees or cacti will be cut. Protected species will in any case be preserved. When there is no other option then to cut a tree or cactus down, at least three trees or cacti of a native species will be planted in exchange.

Isn’t it a better option to build new homes around Kralendijk, which also houses all necessary services?

At this moment, it can be established that Kralendijk is slowly beginning to congest. One of the current qualitites of Kralendijk is that there are still green zones left. These should be preserved in order to be more adaptive to climate change, for example by using these zones to retain water and in that way prevent runoff from soil into the reefs. Furthermore, the area around Kralendijk is ‘cluttering’ and more and more building plans decrease the spatial quality of this area. By developing a high quality residential area, that will relieve pressure from Kralendijk, the connection from Rincón with the rest of the island will also improve.

How will recovery and maintenance of the landscape be financed?

Who will manage the maintenance of the estate?

In time, a management organisation will be founded, which will manage the residential part, as well as the greater area of Bolivia Estate.

How will goats and donkeys be kept away?

In consultation with the owners of the animals, they will be captured. Afterwards, measures will be taken to keep the estate goat and donkey free.

What will happen with the ruins of the old plantation edifices?

If possible, these edifices will be restored and receive a new function in the estate. For example, one might think of a service desk or a restaurant for the eco-resorts, or a visitor centre to receive visitors of the estate.

Will the estate remain freely accessible to everyone?

Yes. However, there will be some form of entry regulation. In that way, unwanted activities such as illegal waste dump can be prevented.

Now, people often freely walk, mountainbike, barbecue and drive across the terrain with motorcycles or quads. Will this remain possible?

Yes. However, paths will be created, in order to give certain areas the possibility to restore.

What percentage of the Bolivia are will be built upon?

What about the energy supply, sewage, and such matters?

The estate will be self-sustaining as much as possible. Sustainability and circularity are among the core themes of the development. At this moment, several studies are being done that will provide insight in the feasibility of the ambitions.

Will Bolivia become a gated community, with guards at the gates?

No. However, there will be surveillance by the park managers.

When will construction start?

In this stage, that’s impossible to say. First, all procedures have to be complied with, after which permits have to be applied for.

All building activity is accompanied by some nuisance. However, it will be attempted to minimize all nuisance as much as possible.

Where do I apply for a rental house, or a house for sale?

In some time, application will be made possible through this website.

Will there be shops and other services?

Yes, there will be. This is also to reduce traffic flows to Kralendijk.

How do I qualify for agricultural land?

There are plans to facilitate agricultural activity on Bolivia. The goal is to support the self-sustainment of the island by facilitating agriculture. This will be agricultural production on the somewhat larger scale.

How many eco-resorts will be realised and how big will these be?

There is room for 5 eco-resorts of high quality, which will be well fit into the landscape. In the current plans, there are searching areas of each 10ha.

Will there be a golf course?

What is the business model for the owners of the Bolivia Estate?

The goal of the owners is a sustainable and valuable development for Bonaire. Of course, some revenue is necessary in order to make this happen and to sustain the estate for the long term.

Is the Save Plantation Bolivia foundation legitimately worried?

The goal of the foundation, as they stated in an interview in the newspaper Trouw, is to prevent any development in the ‘backyard’ of the inhabitants of Luga Aleha. In that sense, their worries are legitimate. However, the development is being done very carefully, that fits in the existing area very well and doesn’t impact existing, valuable nature. The development will specifically take place on sites where nature has vanished, and simultaneously nature will be restored. The problems Bonaire is facing, such as increasing growth of population, shortage of affordable housing, the absence of economic drivers other than tourism, the congestion of Kralendijk, erosion and runoff of soil, excessive grazing, and poverty, for which the development of Bolivia can be a part of the solution, are at odds with a mindset of ‘not in my backyard’ of an organisation that has made it its goal to prevent anything from happening in their ‘backyard’.

Will there be built on the cliffs?

Can I still go fishing on the Bolivia coast in the week ends?

Yes. Currently a lot of people go fishing along the Bolivia coast. This will remain possible in the future.

Will there be a theme park, water park, or something similar?

Bolivia Estate is being developed by
Bonaire Properties N.V., with as a starting point an optimal balance between preservation and recovery of nature and cultural heritage, housing, agriculture and recreation.